A birthday toast in special mugs 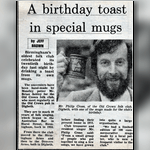 Birmingham's oldest folk club celebrated its twentieth birth. day last night by drinking a toast from its own mugs.

The souveniers have been hand-made by Moseley potter Mr. Brian Ashley for the Old Crown folk club, who meet regularly at the Old Crown pub in Digbeth.

They are to mark 20 years of folk singing,which began in the Australian Bar in Hurst Street, Birmingham, back in 1964. From there the club -moved to the -Birmingham Arms and then to the Drovers Arms, both in Digbeth, 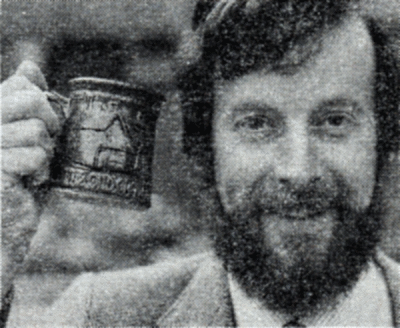 Mr. Philip Cross, of the Old Crown folk club, Digbeth, with one of the mugs made for the club's birthday.

before finding their present home in 1972. Club treasurer - and resident singer Mr. Philip Cross said: "From a small group of people who got together to sing a few songs, we have grown
into quite a large organisation. "We had a limited edition of 100 Commemorative mugs made by a local - potter, who is now a frequent visitor to the club."