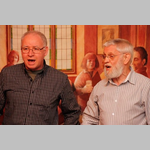 Tom and Clive first met about ten years ago when singing with a shanty group. Since then they have joined forces and are gaining many loyal fans up and down the country. Tom, a Lancastrian, is well known in the folk clubs across the North West for his lovely, relaxed singing style, and is a member of Titanic Brewery's shanty crew Nine Tenths Below. Clive, who is no stranger to the club also sings with The Laners and the shanty group Sharp As Razors. The duo’s repertoire consists mainly of traditional songs and contemporary pieces written in the traditional vein. Many of their songs have choruses so be prepared to sing