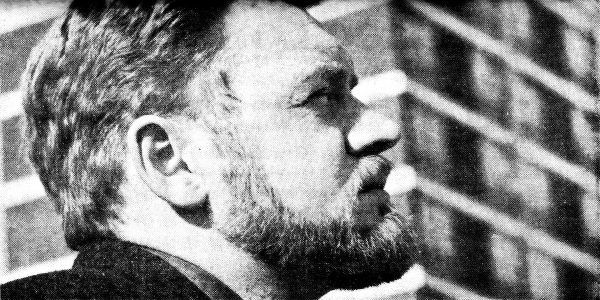 First of a fortnightly column on the Folk scene in Birmingham, by

Then they decided they all deserved a pat on the back.

Brum, they discovered, is buzzing. Everyone is well-catered for.

The strict traditionalists have the icy vintage champagne peaks of Charles Parker and the Birmingham and Midland Folk Centre.

The floating folkers (traditionalists, yes, but sometimes they like to let their hair down) have the poteen flavoured mead dished up by the Campbells at the Jug o’ Punch—and there’s always Harvey Andrews on hand to serve an unashamed and un-folksie cocktail.

Everyone says they are happy with the Folk scene in the Midlands. But after that comes the rift.

Because everyone has his or her definition of what Folk music is and should be.

Ian Campbell (short and bearded, currently packing for a three-week tour of Denmark) stammers apoplectically when he recalls that the Mommas and Poppas are now labelled Folk singers in America.

Purists, or in it for the money?

Ian shrugs his shoulders. “Make up your own mind. My, sister and I are respected among the traditionalists because we frequently sing or arrange unaccompanied traditional songs.

“But the Campbell Group itself belongs more to the entertainment world.”

Incidentally the Jug o’ Punch may soon have a regular Folk programme on Radio Four in the Midlands. 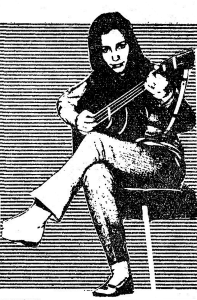 Mr. Michael Ford, B.B.C. music producer, is to record a couple of pilot programmes from the club.

If Ian tries to bridge the gap between contemporary and traditional song, Charles Parker (tall, thin and bearded) is more severe.

Prospective members of the Grey Cock Folk Club (formed under the aegis of the Birmingham Folk Centre) are expected to enumerate their “folk experience’ on club entry forms.

“It doesn’t make any difference to their joining,” said Charles, “but from the song collectors’ viewpoint, it is better for us if they know a little about Folk music and song.’

Apt as he is to burst into song to illustrate a point, Charles Parker can be daunting to acquaintances. Words not to use in his presence are “Joan Baez” and “purist.”

The former, he says, is a strummer. And if, as has been alleged, the latter applies to him, then how is It he can sing Folk songs at all?

Folk songs as sung by purists can be rendered only as they were sung at the time they came to be a song of the people.

Most folk enthusiasts who don’t know the Holy Ground Folk Club, domain of the Munstermen, think it is full of large, hirsute Irishmen belching out the chorus ("She’s a fine girl, she is”) between fisticuffs and Guinnesses.

Michael Lillis, club secretary, agreed that most members enjoyed choruses but stressed that the Holy Ground members hear not merely true Folk but Contemporary songs written in the Folk idiom.

“Our audiences are especially interested in traditional Irish song, but when Dominic Behan came here, his modern songs went like a bomb.

“Birmingham people won’t accept any old thing in the way of Folk. We have noticed that our members are far more aware of Folk tradition now than they were when we opened a couple of years ago.”

Just a trifle more serious than the Holy Ground, the Fo’c’sles Folk Song Club are working out the possibilities of a Folk Culture Study Group.

The resident group here are all interested in traditional songs rather than in the modern in old dress. As attracted to English Folk songs as Holy Ground members to Irish, the Fo’c’sles and their “resident” audience have already done some small research into their songs. 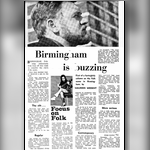