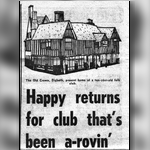 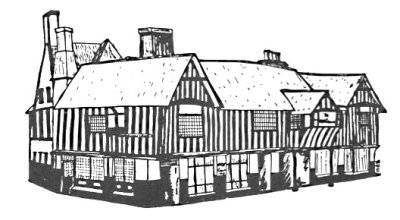 THE OLD CROWN, Digbeth, is 10 years old this week.

By which I mean the Old Crown Folk Club, Digbeth, is 10 years old this week.

Well, at a time when clubs in the West Midlands have a high mortality rate, (the Skillet Pot spluttered out recently, Sutton Traditional went the same Way) the club that has changed its name seven times to suit the hostelry to which it meets, has done pretty well to survive.

Surprisingly because I’m amazed anyone ever knew where to find it.

In its 10 years it’s met at the now-demolished Hungry Man in Broad Street, the Plough and Harrow – not THE Plough and Harrow — the Australian Bar, the Birmingham Arms, the. New Inns; the Drovers Arms; and now the Old Crown.

Its committees have known some fairly tough infighting, have fallen out, been re-elected, fallen out again, disbanded and made it up.

The one Static fact about this gathering is that you will always have found it on a Friday night in a pub in the older areas of the city.

And, like a regular said to me, you could sink one hell of a lot of pints looking for it.

Its founders have left the city: faithfuls who remained have moved the club before the tide of carpets and plastic chandeliers currently, engulfing-city taverns.

I’m glad they escaped too. Because it’s a great place in which to grow mellow, the atmosphere of this club.

Nobody gets too intense about sheep-shearing ditties from the Outer Hebrides but audiences have a genuine desire for true folk music.

Young Michael Frost, pursuing a post-graduate course at Birmingham University, explains that the club - wherever it may be - has a couple of members of its audience on its committee.

"They are pretty quick to point out who would; popular as guests,” he says.

“People at ‘the top’ with us include a draughtsman, a laboratory technician, somebody who’s something in management; a teacher and a student,