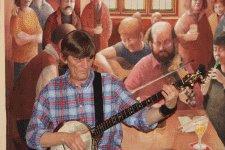 Ex Resident and Committee member, Pete first turned up at the club in 1967 with his guitar and sang "Spanish Ladies". He became a valuable addition to the club and soon joined the growing band of residents at the New Inns. He later teamed up with Chris Richards, achieving national status on the folk scene. Pete has since become a one man folk industry, starting his own record label,performing in a number of high profile groups and teaching folk music and dance in schools as well as his folk club and festival bookings. He was the obvious choice as the club's guest at the Lamp on the Friday night to start our 50th birthday weekend.