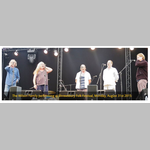 ***Ticket night*** Yes you saw them at the Albert Hall or the Sage Gateshead but tonight you can hear them at the Lamp. Teesside’s famous singing family “The Wilsons” are coming to help us celebrate our 52nd Birthday. The expression the wall of sound could have been invented for these guys, with five strong voices singing the songs they love in their unique way. From a repertoire spanning 40 years they sing songs of the land and sea, certainly about British heroes, but mainly about the common man who toiled to feed the family.Their stories are imbued with the dignity of labour served up with commitment. They will raise the roof but also raise a smile with their banter. Come early, but come with a ticket, as it will be a sell out.