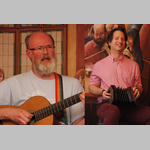 Jamie McCoan and Stuart Estell are two of our regular singers at the club that have contributed to many a successful night. Jamie has appeared as a guest up and down the country at clubs and festivals. His forte is songs by contemporary writers such as Kieran Halpin, Steve Tilston and he probably knows more about Jake Thackray then most. Stuart is a fine concertina and guitar player and has an enviable repertoire of English and American  traditional songs. He seeks out wonderful versions of these and can hold the audience mesmerised by his rendition of songs you thought you knew. This joint guest night is a departure for us and has come about by requests from Our audience.