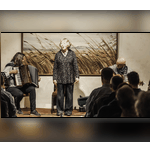 This is a coming together of Carolyn Robson, Paul Hutchinson and Kevin Dempsey and each of them could hold an evening on their own. Carolyn’s superlative voice has had us mesmerised whenever she has appeared before, Kevin is known for his wonderful guitar playing and Paul is a brilliant accordionist. Expect music and song, both ancient and modern, but come early as we expect they will garner a lot of interest.