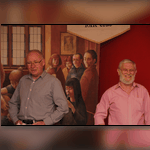 Clive Brooks and Tom Perry make their second appearance at the club much to the delight of their many friends here. With a wealth of material they can call on not just from their work as a duo as they both sing in other line-ups namely Clive is part of Sharp as Razors and the Laners while Tom is a former member of Nine Tenths Below. As a Duo their repertoire is composed of songs that are mainly from the English traditional that encompass shanties, ballads and songs both of the land and sea interspersed with contemporary numbers with a trad feel to them. You will have plenty of opportunity to join in.