The First Two Months - The Opening Night of the New Club

The Opening Night of the New Club 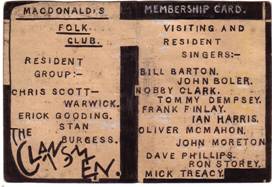 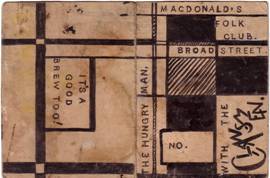 Ron and Kathy arrived at the Hungry Man at around 7.30pm and for the first time saw the clubroom. It was remarkable! The room was long and could obviously hold up to 80 people with plenty of seating, but the really unusual feature, was the wall opposite the doorway which was covered with large mirrors, giving the room the illusion of being twice as large. This obviously would make any audience appear twice as large too. All the founders were there by 8.00 pm. plus a number of local singers who probably came out of curiosity. By 8.10 pm. half a dozen non-singers had arrived and been signed in as members after paying their 2/6d. The singing stated with Stan and then Erick followed by Chris and thereafter-local singers.

Each sang 2 or 3 songs. At half time about 27 people were in the room and some atmosphere was starting to build up. The acoustics of the room were not bad and helped the atmosphere. By the end of the evening every one felt that it had not been a bad start and promised quite well for the future. The next week went even better and over 40 people arrived including most of the previous week’s customers and singers.

The careful planning and efforts seemed to be working and it was on this happy note that Ron and Kathy went off on their week long holiday to Italy. They arrived back to DISASTER!