The First Two Months - Opening Night at the Australian Bar

Opening Night at the Australian Bar

We put 30 seats out for the hoped for audience and then waited. By 7:45pm people were drifting in and The Clansmen started the singing at about 8:10pm with a chorus song. Then Stan, Chris and Erick each sang a couple of individual songs before giving the floor to the first of the local singers. We already had enough local singers, all unaccompanied, to give them 2 to 3 songs each. 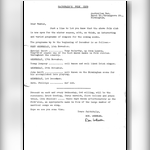 Chorus songs known to the crowd immediately became an obvious singing choice because of the excellent acoustics. Whether quietly sung or otherwise, vocals went well especially as all the singers on the night already had plenty of experience of singing around the club scene. Seated by the door at the far corner of the room, I was particularly aware of every word or note coming from the other end of the room. By 8-30pm.We had about 25 paying members and six local singers. The “last minute” running about had been worth it. We had also posted someone at the Plough and Harrow to redirect members who were still not aware of the move. No one seemed to object to the luxurious surroundings and the Davenport ale gradually made a big impact on the audience participation. When the night finally finished with a suitable song from the Clansmen we all felt that it had been a very good evening. The following week proved the point when about 40 paying members, including practically everyone from the week before, came to the club with even more local singers. The landlord was obviously happy with his extra sales and I just hoped that this would see an end to our run of bad luck.

The weeks that followed saw almost continuous success with audiences eventually settling down to about 50 paying members each week. We were also getting a steady number of local singers and no longer needed to stimulate the audience numbers with newspaper advertisements. Feedback also suggested that the club was getting a good reputation among folk circles. The half crowns were starting to add up and the next decision was how to use the surplus money.

It was decided that we could alternate singers’ nights with the booking of a well known local singer, suitably advertised in the local press. This, of course, would be more publicity for the club and suitable guests would be an extra perk for our regulars. It did mean me visiting other local clubs and booking singers directly but this was no hardship. We always tried to keep spare funds down to a bare minimum in line with our “no profits” policy.

So the club sailed on. Everyone enjoyed singing, floor singers and audience alike and traditional folk song was becoming the dominant musical feature.

The club had quickly developed a distinct personality and, after a short time, we had an audience that wanted British traditional music with good rousing choruses so that the audience could do its best to raise the roof.

Two of our first guests were Tommy Dempsey, a leading local singer, who sang fine Irish traditional songs and John Swift, who sang quietly to a self accompanied lute. The Australian Bar suited them both perfectly and we had very good evenings on both occasions.

Though we didn’t realise it immediately, the club’s development was to have a profound effect over time, radically changing the club’s personality.