Stan contacted Ron on his first day back from holiday to tell him that on the third week they had been informed that the Hungry Man was being vacated immediately, boarded up and then demolished!

This had already happened and Stan had, at almost impossibly short notice, found another venue at the Plough and Harrow near Digbeth, but was not happy about its suitability. Ron and Kathy arrived on the following Friday to enter a small gloomy public house and, climbing a steep narrow and worn staircase, found themselves in a tiny scruffy room which would be overcrowded with more than 20 people in it. As it happened only about a dozen or so turned up. The evening wound up very quickly. 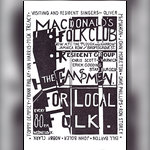 Ron could see that all that initial promise had evaporated and, after a sleepless night, decided that something had to be done quickly to try and prevent the club’s imminent demise. Next day he was in the Birmingham centre before midday and began to trawl around the public houses looking for a decent alternative to what he had seen the night before. After fruitless searching and, some distance away, at the bottom of Hurst Street he found an interesting looking public house called the Australian Bar. And entered what was obviously a very well looked after premises. It was a Davenports House, a very decent beer, and after a pint he chatted to the landlord and asked about a possible clubroom. The landlord ushered him upstairs and, passing through a doorway, Ron found himself in a superb room, long, good for at least 60 people, nicely carpeted and with lots of folding plush seated chairs. Acoustics were very good, comfort indeed, and far different to the majority of folk clubrooms. Though somewhat taken aback, he asked if it could always be available on Friday evenings and, with trepidation, how much it would be. The landlord said, “Okay” and that drink profits should more than cover any hire charges. The club could indeed start on the following Friday. Hardly able to believe their good fortune Ron rushed to a phone box and called Stan. After he had passed the news on, Stan immediately agreed that they cancel the next Plough and Harrow so Ron, with great pleasure, did just that.

The following week they were very busy getting the message of yet another change of venue around. Ron and Kath arrived at about 7.00pm on Friday, Stan was already in the clubroom admiring it. Resident singers were soon in place and now all we needed was an audience.. WE GOT ONE!! Not big, but what could you expect? The evening went well, a combination of good beer and an appreciation of comfort rarely experienced in the Folk world of 1964. Next week practically every one came back and another 20 new faces in addition. A good atmosphere was rapidly developing. From this point the club went from strength to strength and was soon packed every week, all seats taken and with members standing against the walls. The coming of autumn with the other clubs reopening made no difference to numbers… We were now solidly established on the scene.