Our 50th season proved to be one of highs and lows. Our opening night with Nancy Kerr and James Fagan was tremendous, with a full house of our usual singing audience. They were followed by Martyn Wyndham-Read , Janet Russell and Stream of Sound,  a youth chorus who sing a‑cappella harmony.

Then completely out of the blue, The Globe, our home for eight of the last nine years, unfortunately closed down at very short notice, but we were lucky enough to be able to relocate immediately to temporary premises at the Lamp Tavern in Barford Street. We thought that this would give us enough time to find a new, permanent home. So what did we do? We did what we have done many times before and trudged the streets of Birmingham, visiting pubs and clubs with function rooms. On this occasion our visits proved fruitless, but an article describing our plight, placed in the Birmingham Evening Mail, resulted in offers from a number of venues. 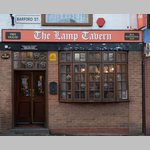 In the meantime discussions with Eddie, our temporary landlord at the Lamp, had progressed and happily, we were offered a permanent home, with the added bonus of a selection of real ales, some actually brewed in a micro-brewery on the premises. The disruption and change of venue reduced audience numbers slightly, but they soon rebuilt and we enjoyed Peter and Barbara Snape, Barrie and Ingrid Temple and Richard Grainger. Another night with a difference was Peppers Ghost, where a Victorian magic lantern show of slides accompanied by related songs, music and readings, was a tremendous success.

So, from the low point of the closure of the Globe, to what was a real high point and one of the best things that the club has organized (well, in our opinion anyway), our 50th birthday weekend. Held on the 16th 17th & 18th May 2015, we kicked the whole weekend off with Pete Coe as the Friday night’s guest at the club. The evening was sold out, with a whole host of past residents and club members swelling our regular audience numbers. Pete was one of the club committee members and a resident singers for a number of years before he turned professional, and he gave us a wonderful evenings entertainment which set the scene for the rest of the weekend. Saturday 17th saw us relocate to the Edgbaston Palace Hotel, on the Hagley Road in Birmingham, for two concerts with an evening meal in between them. The guests were:-

Singers from both past and present started the proceedings for each of the two concerts, and it was particularly poignant for a number of people to hear Ron Wheeler, one of the founder members of the club, singing with his son Tobin. The evening concert finished up with the Teacups doing what they, and the “Black Diamond family” do best, singing shanties and chorus songs, with the rafters being lifted off the hotel roof by the harmonies and sheer volume of sound produced by the audience.

The mix and variety of the performers in the two concerts, the excellent food supplied by the hotel, and (for a change) the  brilliant weather made the whole day well worth all the effort that had gone into it.

On Sunday 18th anyone who was able to turned up at the Lamp for a lunchtime singing session. It was a full house, including 29 singers and, everyone in a singing mood. This went on for 2 -3 hours, with a short break for some refreshments in the middle. It was a real treat to hear singers and musicians who had been residents or regular attendees at the club from 1964 onwards. The smaller club room at the Lamp gave a much more intimate atmosphere than the hotel, and certainly everyone who attended really enjoyed themselves.

Photographs of the 50th birthday weekend, taken by Derek Catley, can be seen here, on the website.

Having come down to earth after the high of the birthday weekend, we had two singers’ nights on the trot, and the second of those turned out to be one of those where everyone turned up   on the same night, with 29 singers and a total of 48 people present, including Lynne Heraud and Pat Turner who had been guests earlier in the season. The week after, on the 6th June, our guests were the Melrose Quartet, who gave a faultless performance to a full house, leaving everybody asking for more. Greg Russell and Ciaran Algar’s first time visit bought a touch of youth to the club, before we closed for the summer.